Since 2500 B.C., the cultures that grew into the modern state of India have been involved in a wild dance of religion and politics that make the India of today one of the most colorful, culturally rich, hyperintense, and interesting places in the world. The culture, politics, and economic effects can run to such extremes, in fact, that tourists have often been divided in to “love” and “hate” groups when it comes to appreciating all India has to offer, in relation to the trials one must at times undergo to enjoy it.

The history of the region that is now India, Pakistan, Sri Lanka, Bangladesh, and Nepal has evolved based in large part on the tides of religious belief. Founded in the Indus River valley on the roots of Hinduism, the millenia that followed saw the rise of Buddhism, and Islam as prominent and politically charged practices. This, coupled with the forced influence of colonizing groups such as the early Aryans and, later, the Portuguese, French, Dutch, and English; as well as the great size of India and its multitude of people, makes this country on of the most interesting from a social standpoint. The cities are crowded and bustling while the countryside may at times seem spare. The economic divide is garish and unashamed, and, while no longer sanctioned by the government, the age-old caste system is still very much in place.

But these elements only make up part of the social fabric of India. Since the Partition of Hindu India and Muslim Pakistan in the 1940s, heated political tensions–and the occasional nuclear standoff–between these two countries over rights to the region of Kashmir have had a global effect. Further Hindu-Islam conflicts have flared up in other regions within India. The west plays an increasing role in Indian culture, from the tremendous British influence, which was responsible for building everything from an internal transportation system to a strong academic program; to America and its media and fashion obsession; and the former Soviet Union with its power and influence in that region (particularly before its fall). All of these things come together at times to feel counterpoised, and at time chaotic.

International flights to India typically go to Mumbai, Delhi, Kolkata, Chennai, and Kerala. If coming from Europe or beyond, it’s a good idea to have your accommodations organized in advance, as these flights tend to arrive in the predawn hours. This way you can go straight to your hotel or otherwise, rather than wandering the streets until sunrise.

Overland, the most traveled routes between India and Nepal are the Birganj-Raxaul Bazaar, Sunauli-Bhairawa, and Kakarbhitta-Siliguri roads. The only crossing between India and Pakistan is between Lahore and Amritsar, which is accessible by train or road. Bus service runs between Lahore and Delhi, operating four times a week, but be cautious as it could be a potential target for nationalist violence.

The state-run domestic Indian Airlines flies throughout the country, as does the international carrier Air India. There is also a glut of smaller domestic airlines, including Sahara Indian Airlines and Jet Airways, that will take you throughout India.

The infamous Indian train travel can be a colossal ordeal, but is also essential if you want to see the “real” India. Knowing the rules of the game is important if you’re going to survive what could otherwise be a nightmarish experience. Stick to the express or mail trains, but experiment on all the different classes of travel to see every side of the culture. Patience is the key in all aspects of the train system, from booking fares to just about any other aspect of transportation beaurocracy. It can be frustrating to the uninitiated, but keep it together and you’ll find the confusing methods that make up the Indian rails actually add up to a working system.

Buses provide another option (or, in the cases of getting to Kashmir or Nepal, maybe the only option). They range in price and comfort depending on where you are, how busy your route is, whether you use a state-run line or a private carrier, and more. The less expesive lines tend to be overcrowded, loud, and uncomfortable; some of the pricier lines may provide some relief from that and will often get you where you’re going faster than the trains.

Weather in India
It bears repeating: India is a huge country. There are microclimates throughout India, and like any nation of its size, the best times of year to visit–climatologically speaking–vary depending on where you want to go. October to March tends to be the most pleasant period across the bulk of India, but monsoons, deserts, Alpine mountains, and more mean dramatic differences between localized areas. Before you go, check up on the climate of your specific destination and keep it in mind as you plan your itinerary.

Noosa Heads is a cosmopolitan coastal town on the southern shore of Luguna Bay, located on the Northern end of Queensland’s Sunshine Coast approximately one hour’s drive north of Brisbane. It is a vacationer’s paradise for all ages and all lifestyles; beautiful sandy beaches, turquoise blue water, parks, designer boutiques, art shops and surf shops, there is definitely something for everyone, of every age. 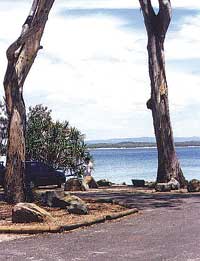 My husband and I rented a beachfront, one bedroom apartment on the second floor of a three level apartment building. The apartment was very clean, bright, spacious and very well equipped, it was like being at home, we even had a laundry room just down the hall. We had a fabulous, unobstructed view of the ocean from our large shaded deck, and easy beach access through a public walkway on the front street. Noosa Heads offers a complete range of accommodations from the luxury beachfront suites to backpacker’s hostels and for the truly adventurous vacationers, why not rent a houseboat.

We were unpacked and looking for a grocery store in no time. We were so excited about exploring this beautiful area but first we needed to take care of the necessary tasks – buying groceries. There were several food stores to choose from just down the street. Australian dollars (AUD) are used in Noosa Heads; either exchange your money at the local Bank or use one of the many ATM’s available in the town. The only thing left to do was to enjoy our four night/five day stay. 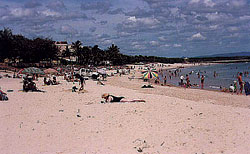 There was no end to the activities that would keep us occupied during the day that is if we wanted something to do. We could take a walk through Noosa National Park, easy to find, we just followed the signs to the walkway. The view of the ocean and surrounding areas were spectacular; the walking trails were easy walking, it wasn’t necessary to be experienced hikers. We stopped along the path and listened to the birds singing in the trees, examined the different plants and wild flowers growing under the shade of the trees, and took many pictures.

We took a walk over Noosa Hill to Noosaville on the Noosa River. We will never forget our walk the second morning of our stay. The trail to Noosa Hill was very well marked so we had no problem finding our way; there was a nice walkway through the wooded area so walking was very easy and it didn’t involve much climbing. Because the pathway only allowed for walking single file, but that only increased the sense of being closer to the surroundings. The birds were singing and the air smelled spicy and almost medicinal from the Tea Trees, Australia’s natural healing wonder – Tea Tree Oil. 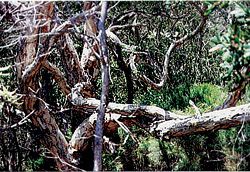 Suddenly we slowed our pace and over my husband’s shoulder he said “Look at the lizard”; now, I’m not a fan of lizards, but my curiosity told me that I needed to see what he was talking about. He took a step sideways off the path and there standing only a few yards away was large green lizard. The lizard was about five feet long from its nose to its tail, and while staring at us, it kept sticking out its long, skinny tongue. To me, it looked 8 feet long and it was probably going to eat us! The lizard animal walked off into the bush, minding its own business, and I was much relieved.

I would have stood in that very spot for the remainder of the day except the thought of the lizard coming back convinced me I should keep moving. Once I could actually make my legs work I ran until I was out of the wooded area, continually checking over my shoulder to make sure we didn’t have company following us.

Noosaville is a small but busy community. It offers vacation accommodations, several restaurants, boutique shopping, grocery stores, and two small shopping centers. We walked into the first store we came to, a Drug Store. I went directly to the first clerk I saw and told her about this huge lizard like creature we had just encountered, the size of which was growing each time I thought about it. Did she know that such a creature was lurking in the woods right next to their store? She smiled at me and said “Actually that’s Noosaville’s Pet Iguana, he’s been around for years and he won’t hurt you unless you threaten him”. In true Australian fashion she shrugged it off like it was nothing.

If you enjoy water sports, there were many to choose from, or if you just wanted to soak up the sun, with a cool drink and a good book, the beaches were clean and just waiting for you to enjoy.

Even though we had stocked the cupboards of our apartment with groceries, it is always fun to sample the local cuisine. There were many restaurants in Noosa Heads to choose from, be sure to treat yourself; they use fresh, locally grown tropical fruits, spices, ginger and sugarcane in their menus along with many fresh seafood selections. Don’t forget to bring your own bottle of wine, its quite acceptable.

This was a perfect holiday escape and we would definitely recommend it as a “must visit” destination.

If you go, take your Passport and Visitor’s Visa, fly into Brisbane and buy a ticket on an Australian Greyhound Bus; the bus will conveniently drop you off in the middle of town. Check in at the Tourist Information Booth or ask anyone on the street for directions to your accommodations. Renting a car in Brisbane is another option but since they drive on the left hand side of the road, why be stressed out when you arrive, let someone else do the driving and just enjoy your vacation.