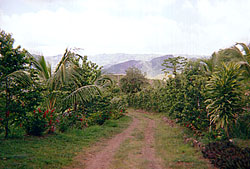 There is a place in Puerto Rico where a panoramic view of Olympus-like mountains, veiled by the shadows of clouds, encircles a town of oft-neglected interest and history. It’s a place where lush greenery grows as far as the eye can see and the golden hands of the sun touch every street corner. This place is called Coamo, just a short drive south of San Juan and northeast of Ponce traveling on route 14. The tranquil valley in which Coamo rests is largely unaffected by the hustle and bustle of the major Puerto Rican tourist centers and appeals to those who prefer “the path less traveled.”Located in the interior of the island, Coamo is a nature lover’s paradise. Driving along meandering country roads will get you so close to the feet of mountains that you can practically stick your hand out of the car window and touch them. Concrete homes painted in pastels of peach, lime, and lavender dot the terraced landscape like rugged steps, each one higher than the next. I was so transfixed by the towering majestic scene before me that a dull cramp settled at the base of my neck from looking up. But I was hypnotized. If you enjoy nature, as I do, consider bringing a neck brace. The tiny sedan in which my companion and I traveled whined like a stubborn pack mule as we coaxed it over the steep hills and dips that snaked before us.

Once you’ve had your fill of back-road exploits, you can hit the heart of Coamo. The Plaza de Mercado is the center of activity. An endless stream of traffic pours through the narrow city roads, which are barely wider than one lane on a U.S. highway. Driving in Coamo is not for the timid. If you can drive here you can drive anywhere. The slivers of asphalt are always congested from 8:00 A.M. to 3:00 P.M. when the masses are out and about taking care of their business so they can hurry home and escape the maze of cars and people. Be forewarned that travel in this city is a free for all. Cars seem to only yield at stop signs, bullying their way into the rush of traffic. Blaring horns are a constant in a show of annoyance and defiance, but everyone seems to take it in stride much like riding bumper cars at an amusement park where you are always punching the brakes, hitting the accelerator, and swerving in and out of the path of impending collisions.

The shops in the plaza are sandwiched together along the strip. Here you will find furniture stores, gift shops filled with t-shirts, figurines, and Puerto Rican and American paraphernalia, as well as public markets filled with green vegetables and exotic fruits. These stores are somewhat small with little decorative flare but are well stocked, and the prices are relatively cheap (the lack of sales tax is quite encouraging to the wallet). It should be noted that items bearing the name “Puerto Rico” or the image of the island’s favorite animal, the amphibious coqui, are markedly more expensive. 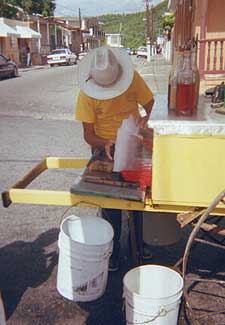 Coamo is an amazing place. The third oldest city in Puerto Rico, it is steeped in history and rich tradition. Founded in 1579 by Cristóbal y Blas de Illescas, the town was originally called San Blas de Illescas. The current name comes from the Taino chief Coamey. At the centerpiece of the Plaza de Mercado is the famous Iglesia de Illescas, a Catholic church initiated by Friar Diego de Salamanca in 1616. It was the first church of its kind to offer religious service to the small community, and today it stands as the cornerstone of the city, with its blinding, pristine façade gleaming in the fierce Puerto Rican sun. The Coamo Museum is just a few yards away from the church. Within its walls are housed interesting facts about the town, the indigenous Taino culture, and of course the Spanish influence with regard to modern Puerto Rican culture.

Tradition is very important to the people of Coamo. While many cities in Puerto Rico are striving for a more modern, secular society, Coamo is searching for a time long past. This sense of nostalgia manifests itself in intriguing ways. In contrast to Ponce and San Juan, where you have elegant eateries and hotels, in Coamo you will find cozy cafes, open markets, and, if you are lucky, the town’s well-know snow cone maker, called a piraguero, utilizing the old method of making cones shaved from a block of ice, topped with delicious syrup and flavoring.

Another example of revival of the “old ways” is the celebration of the town’s religious heritage. The Catholic Church has been a major influence in Coamo since the city’s founding. Many in the community are seeking to reinvigorate the culture’s religious heritage, and the Rosario de Cruz is one facet of this movement. This spectacle takes place every Friday during the month of May. It alternates from one house to another in worship of Christ and the Virgin Mary. The Rosario is a mark of Spain on the city’s culture. It consists of traditional prayer songs accompanied by modern music, and the spiritual essence of the event is liable to move the most skeptical of hearts.

Coameños, as the residents of Coamo are called, come in a variety of shapes and sizes, but one thing they all seem to have in common is a zest for life and an uncontainable energy. They are a humble people, deeply religious and fun loving. I found them eager to answer questions regarding their home and, when they learned of my intent to write an article about their town, I was given many tidbits of interesting facts. For example, although Bacardi rum is prized on Puerto Rico, you can find a colmado (convenience store) selling the island’s second-favorite beverage, Coors Light, on just about every corner. I drank so much Coors Light during my stay in Coamo that I expect my first born to come out with the word “Coors” stamped on its forehead … but that’s a another story. I found the citizens of Coamo to be quite amicable and hospitable, and they will greet you, not with an informal handshake, but with a warm kiss on the cheek as if they’d known you for years. Don’t be surprised if you find yourself invited to a delicious lunch of ensalada de los pulpos (octopus salad) and fried plantain. By ingratiating myself with one family, I found myself working on their finca, a small farm, cutting espigas off of recao plants (an herb similar to cilantro; my back may never be the same). Nevertheless, the people are quite inviting. Impress them with your Spanish and make a friend for life. 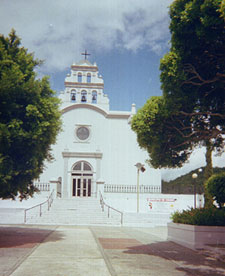 After all that sightseeing and mingling with the locals, it was time for a little R&R. Coamo has that covered too. For golf fanatics, one must visit the beautifully kept Coamo Springs Golf Club and Resort. The eighteen-hole course is the only one of its kind in southern Puerto Rico. The weather is nearly always perfect and the fairways are from heaven. If golf is not your style, you can take a jaunt to the famous Baños de Coamo. Used by the natives of Coamo for its mythical therapeutic powers, the baths of Coamo are thought to be the “Fountain of Youth” for which Conquistador Juan Ponce de Leon searched so frantically. There are two entrances to the springs. One is for the public and is free; however, it not well maintained and is often crowded by the locals who use it as a meeting place to discuss civic events and politics. The other entrance is through the parador Los Baños de Coamo. The forty-eight-room hotel was once one of Puerto Rico’s most upscale resorts. Current rates range from US$62-$81 per night. The rooms are not luxurious by any stretch of the imagination, but the accommodations are fair considering the price. If you do not wish to stay at the hotel you can still take advantage of their baths for nominal fee.

So the next time you are looking for a vacation outside the norm that offers good people, adventure, history, and fun consider the path less taken and descend to the valley of paradise. Bienvenidos a Coamo.

2 responses to “The Valley of Paradise: Coamo, Puerto Rico”