Nee said, “I am suffering very much in my life, mum.” I know, I know, I thought–appropriate choice of words for being in Yangon (Rangoon): “suffering.”We are in a Buddhist country…Buddha and the Eightfold Path. You suffer through life–since need or want creates unhappiness, so to be able to do without need and want gives us the ability to reach a higher level of consciousness–and when we die, we are assured of Nirvana. And so, Nirvana…

To me right now, Nirvana would be to be diving into Lake George or sitting on a porch on Martha’s Vineyard, overlooking the sea, or watching the Eel River float by. Nirvana means such different things to us all.

The Burmese are Buddhists–more than 80% are Buddhist anyway–and they are gentle and kind and very devoted. And I wonder, what is it that they want that causes such suffering? They want their children to grow up without malaria, they want to live in a home that is dry, they want an umbrella that doesn’t leak, and they want a job. None of them, it seems, want to get rich, drive a fancy car, and live in a big home or go on vacation. A want for someone in Myanmar (Burma), who is not Chinese Burmese or Indian Burmese, might well be to have a family feast, with enough space in a home for their friends and relatives, or to maybe buy a fresh longhi (sarong).

Ah, Nee, I thought, we are all suffering, but you mate, I agree, are suffering more than we are. And rest assured, you will get a tip upon finishing our tour around the Shwedagon Pagoda. 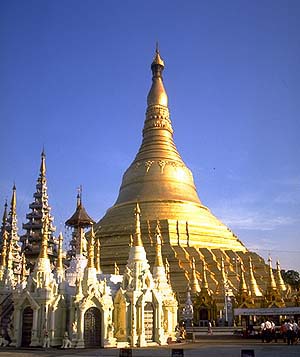 Nee, dressed in a clean longhi and navy blue collared golf shirt, showed us around this enormous religious space, built almost two thousand years ago. The main section (which looks like a giant pointy-topped bell) is just under 90 meters high, is encased with 60 tons of gold leaf, and is truly something to see. I’m just glad it was an overcast day–otherwise sunglasses would have been a must. It was built by two merchant brothers, and thousands of devoted servants, to honor Buddha, and it purportedly contains eight strands of Buddha’s hair. At the top of this structure, a 75-carat diamond is encased–supposedly still there. The sharp point at the tip of the spire would not allow anyone to scale to the top to steal it, although one bloke–a Portuguese trader and adventurer by the name of Philippe de Brito, who spent many years in Myanmar–did make an attempt to pilfer the whole top portion of the pagoda. He got as far as a nearby river, before the bell accidentally slipped into the water and remained there, stranded, for a century or more. Some stories have it that the bell itself, which had been the object of de Brito’s affection, could even be seen poking though the surface when the water was low. That was roughly in the early 17th century, and his punishment for messing with sacred Buddhist symbols remains clear: he was impaled. Unfortunately he didn’t position himself properly, for execution, and it took him two full days to die. Yikes. Poor Senhor de Brito.

The Portuguese trader didn’t make it, but the pagoda was eventually put in order, and although, later, the British tried to take it down again, and earthquakes caused damage, it is very clearly still in the middle of Yangon, able to be viewed from all parts of the city–a stunning sight.

Nee lead us through the pagoda terraces, where Buddhist novices, some as young as 6, 7, and 8 years old, with shaved heads (both girls and boys) celebrate their initiation ceremony with lotus flowers, Buddhist stone, 180 round gem prayer beads (the Buddhist mantra is said 180 times at a go), and prayer and song. If a Burmese is lucky, he will visit this sacred place at least once in his life, so people come from all over this beautiful country–the largest country in Southeast Asia–to savor the experience.

The rainy season has begun, and a storm, a cyclone to be exact, is brewing over the Bay of Bengal. The wind is strong, and we all run to find cover underneath prayer room overhangs facing the main tower. We are surrounded by statues of Buddhist deities–each representing different abilities to grant wishes to the truly devoted. The Burmese are knelt in prayer, palms together, thumbs either facing their heart, or their arms raised higher, thumbs pointing to their noses. They bend down to touch their noses to the floor, and stay kneeling for long lengths of time, concentrating their minds on the Buddha and his teaching. They are very serious.

…Eat little, and sparingly, be kind to one another, speak gently to each other, never revile another human form, live in as secluded and peaceful a place as you can, to concentrate yourselves on higher thoughts….

That sounds nice, I think. Nirvana.

The deity I spend the most time in front of blesses those who are in want of children, so I gave her a necklace of jasmine we bought from the flower venders, and placed a couple of lotus flowers in the flower pot. Why not? I thought. Couldn’t hurt.

Then Nee took us to pay alms to our respective “planet.” My husband Jamie, born on March 9th, falls under the planet for the dragon. I fall under the planet for the lion. So we pour water over the respective deities, and “clean” them, to show our appreciation for all of the luck we have in our lives. And then we concentrate our minds on the Buddha to ask for future happiness.

We didn’t find Nee, Nee found us–sort of tagged along with our tour group, and noticed two clearly white tourists, wandering around the Shwedagon Pagoda, probably thinking, Okay, awesome, giant, very gold–a bit gaudy–would have liked to see it when the British explorer Ralph Fitch fist saw it, overgrown with weeds and trees, among the low-lying mountains. But alas, the Burmese like their gold, and they seem to like fresh yellow paint. They’ve painted fresh, peaceful faces on a lot of the Buddha’s, but we thought the originals would have been so much more intriguing.

Myanmar, or Yangon, really, in the short time we’d been there, seemed an overgrown, decaying colonial outpost. At one time beautiful and efficient, remnants of what it once was had been left fairly unattended to for over 50 years. The lovely old estates are crumbling and many are now deserted–shadows of colonialism–weeds and trees covering once pristine lawns and parks. Handsome white-washed stone walls, elaborate wrought iron gates, lush gardens, water fountains, homes with stylized facades that reminded me of gingerbread detail, all stand side by side with the Burmese timber structures that were as character-filled, if not as imposing as the Anglican churches nearby. The infrastructure is more efficient than Vietnam and Cambodia–less traffic, no motorcycles, more traffic lights, and people obeying them. But Yangon could use a new coat of paint, a bit of sprucing up, a burning of the opium fields, and a benevolent leadership, I think. Myanmar is currently governed by a military junta that often turns a blind eye to a fair judicial system. There has been a history of suppressing democratic ideals, which has repeatedly led to the mistreatment of the members of the democratic opposition. A case in point: the largest democratic political party, the National League for Democracy, is headed by a Nobel laureate and peacemaker Aung San Suu Kyi; she has been in and out of house arrest and forbidden to leave her country (or at least forbidden to return, if she does leave) for much of the past decade or more.

Our tour guide operator (not Nee, but our proper guide) looked, in my opinion, exactly like Aung San Suu Kyi: beautiful, chiseled, medium-to-long hair, cleanly pulled back in a pony tail, about 50 years old (maybe older), but looked much younger. She had beautiful skin and kind eyes, and was very somber–almost angry when she was not smiling or when she was not talking with someone. But when she smiled, she beamed, and you knew that was who she was, truly. Her name was N’uahn.

Of all the people we’ve met in Southeast Asia, the people of Cambodia, I thought, were most beautiful. Something about their eyes, and their inner spirit–they glowed… Especially the children. But the people in Myanmar, both the men and the women, are elegant and confident. They seem to know who they are and where they’ve come from, and despite colonialism followed by harsh military rule, their cultural heritage remains basically intact. All the men wear their traditional longhi, a long Indian-type sarong, with either a colored golf shirt or cotton button down shirt; and the women wear something similar–a long straight batik skirt and matching top. The Burmese now live their lives with virtually no outside influence, as opposed to the Cambodians, who had much of their country and culture destroyed by the Pol Pot regime and various tomb raiders. The Vietnamese, a bit similar to Cambodians for being as lovely as they are, are under considerable outside pressure from Western commercialism–which in a way has resulted, or has seemed to result, in a mania for money and all of the “evils” surrounding want and entitlement.

It seems that the Burmese are not very interested in serious merchanting or business. They just want to live, have a job, and have a family. It seems to be the influence of the Chinese and the Indians that creates an almost avaricious atmosphere, desperate for money. A fast buck here, a few chats there, sell, sell, sell. Wear more gold watches. Appear rich. Make more money.

The Burmese, I bet, before the British ruled the country, and let in thousands of Northern Indians and in the process a tidal bore of cultural diversity, were an isolated, easy-going, agrarian society. Spending their time and money on Buddhist devotion, and in the creation of lives and religious devotional sites. In the 1960s, approximately 12 years after the British left, the Burmese literally rounded up the Indians and Chinese, and told them to leave the country–taking with them no more than 75 chat (currently, approximately 50 cents), and whatever else they could carry. Clearly some time between then and now, they’ve been let back in, to better or worse consequences.

Food in Myanmar is not a strong memory: some curry, some rice, fruit, asparagus, lemon leaf, okra, sautéed crickets. In all, I noticed that among the ethnic Burmese, food is not such a big deal. The monks eat only until noon every day, and most Burmese have gone through Buddhist training. Gluttony, we realized was frowned upon. The Chinese Burmese, on the other hand, love their food and their feasts, as a time for family and celebration. I am more Chinese than Burmese, I’ve decided.

This is a country to move slowly through, making one’s way up to the northern hill tribes–to Inle Lake near Mandalay, and Bagon. Burma has over 35 ethnic tribes–the ones closer to Nepal are the Himalayan Burmese; the ones further south, the Shan; the Wa (who Jamie likes to read about) reside within one of the 14 “states,” ruled by a mafia-like warlord who doesn’t allow foreigners in and is said to be the main cultivator of the opium trade. We’re not going to Wa.

So with Nee gone, and the cyclone moving closer to Yangon, Jamie and I start our time in Myanmar. In all, we hope for a nice taste of a country that should also be seen in the dry season, and never with a bus full of Singaporean tour guides, I’ve decided.