by Ieuan Dolby
A failed or neglected city springs to mind when walking around Macau during the daytime. Around the outskirts of the islands, the doors of modern buildings never seem to open. In hotel restaurants, servers tend to sole customers with reluctance; public gardens remain empty except for the lone tramp rooting around in the bins; roads remain unsullied with tire tracks; and very often, the silence is pervasive. Inland and up the hills, cracked and uneven pathways run into the next as weeds compliment cement on crumbling gray walls; unpainted fences balance precariously around paved basketball pitches, and graffiti adds color to an otherwise drab setting. 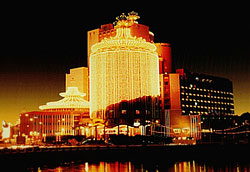 The Portuguese gave this place some amazing architecture when they ruled and controlled the two islands and small mainland peninsula that is Macau. In fact, Macau was the first European settlement in the Far East. The Portuguese beat the Dutch and British by a hair’s breadth with their establishment of this well-positioned and soon-to-be-rich trading post. Hong Kong, Singapore, and Malacca followed many years later as the British, Dutch, and other nations established a presence in East Asia, but at the beginning, through Macau, Portugal ruled the roost.

The Dutch tried many times to get hold of the territory, as did the Spanish and British. But Macau had become Portugal’s prize jewel, and they managed to retain control throughout, only giving it up in 1999 when they handed it back to mainland China according to treaty arrangements.

China now rules Macau under what has become known as a Special Administrative Region, or SAR. This basically means that Macau falls under the Mainland Chinese policy of “one rule, two systems,” a status quo by which Macau governs itself for the most part, as it makes and lives under its own laws, but strictly speaking, belongs to China.

New roads bend around the coast in smooth ribbons, flowing over long and impressive bridges before swooping gracefully in arcs past flashing billboards and over reclaimed land. Newly built high-speed, two-lane motorways whiz past glittering hotels that invite money to be spent, then descend to greet history by way of Macau’s Portuguese heritage.

Working inward and upward modern tarmac meets old cobbles as the flat ground turns into a steep climb. Little lanes wend through neighborhoods that crowd in upon themselves. Antiquated buildings lean against each other and dangle precariously over paths that defy the eyes to follow. Hanging baskets of colorful flowers swing delicately from balconies that threaten to pull down the houses to which they belong, while open windows give glimpses into the crowded lives inside.

The steel and glass facades of hotels and office blocks, the colonial stone museums, and Portuguese Officialdom of yesteryear that grace the flatlands around the coast are left behind when walking inland. The hilly centers of the islands house the majority of Macau’s population; and looking in one direction at these historic structures, the place seems to emulate a fishing village in Portugal, but turn your head and you may liken the view to one of the many “Chinatowns” seen around the world.

But all is not as it would appear. Compared to the heat of the day, when cool drinks and light food go together with quiet streets and an easy stroll, the evening brings dramatic change. From the dull and fading brick work and the overgrown flowerbeds–from the graffiti and flaking paint on shop walls–springs lights of dazzling proportion. At night, a seemingly forgotten city emerges in a glittering display of neon power that transforms this place and everything into a hive of activity and purpose.

As the sun sets over the horizon, people come out to play, tourists put aside their bathing towels and no longer think of cold air, workers get ready for the night ahead, and hotel lobbies are transformed from desolate halls to crowded and bustling meeting points.

As night falls, policemen wipe the sleep from their eyes and come out of their cubby holes, ready and watchful for the evening ahead. Large-muscled men hang around doorways, arms folded across their chests as if to say, “make trouble and you will have to deal with me;” and jewelers open their doors to invite tourists to buy gold at what they say are the cheapest prices in Asia.

But what is really going on in Macau? Why do most people prefer to sleep during the day, workers and tourists alike, and what changes the city from a neglected place under the sun to a fun-filled bundle of activity in the night?

The answer is gambling.

The Macau government makes seventy percent of its revenue from gambling and associated businesses. Most Hotels are built with gambling in mind and thus they boast many casinos and gambling dens on their premises, all with sumptuous rooms and services to woe the big spenders. Limousines carry the rich to their destinations of the evening. Hotels offer special packages for those with money to lose, and girls lie in wait to help spend money that prospectors may have had thoughts of keeping. Bars keep drinks flowing to loosen punters stiff fingers, fast food is lavished on the high rollers, and the large-muscled men have no qualms of throwing out the losers, arms aching as they ceaselessly open doors for the excited newcomer and help the defeated on their way.

The city changes for all who are in it when the casinos open each evening. Once sleepy hotel lobbies come alive, and receptionists hurry to check-in new arrivals by the hundreds as tours from Mainland China pour off trains like ants from a mole hill. Airport-staff sweat freely, as planes land in quick succession to disgorge determined gamblers from Taiwan, the Philippines, Singapore, and other corners of the world.

Time is money that will be spent, one way or another, despite a gambler’s dreams of striking it big. Newly arrived punters race against time to grab their bags, get through immigration, and to catch a cab for their hotel and the casinos next door, above, or beneath.

Not all visitors to Macau are gamblers on a mission, however. Some are genuine tourists who wonder why the city is so bare and drab during the day and have no idea of the other face of Macau at night. Others still are from Taiwan and other first world Asian economies, and they usually come in the form of a group or package tour. Should you see these arrivals as they emerge from their planes, you will notice that they are all male with an average age of around seventy years. This is a special type of arranged tour, in that they are going to Macau specifically to find women. This other side of Macau is reflected in the availability of prostitutes who service overseas visitors or who relieve punters and gamblers of any change that may still be jangling in their pockets.

Prostitutes hang around doorways and exits from casinos, they balance precariously on high heels, and they are covered in layers of make-up that gives competition to even a skilled plasterer. Skimpy skirts ride high on slim legs and breasts heave against tight tops. Purses swing invitingly from wandering hands and sugary smiles are issued freely to those who stop to look (and glares are given to those who walk by).

As night draws on, promises of a new life are offered to punters who leave one casino in search of new ground, despite their nearly empty pockets. Fresh arrivals are given their choice of female company as they prepare to spend money and while away the night among the bells, whistles and bright lights.. A kaleidoscope of women–and men dressed as women– stand around doorways offering the suggestion of adventure and love with husky voices and girlish smiles, giving nighttime Macau a decidedly sinful air.

A neglected city it may be during daylight hours, but prostitutes, bouncers, gamblers, airport staff, taxi drivers, croupiers, fast-food hall owners, barkeepers, bus drivers, doormen, receptionists, bankers, service engineers, thieves and security guards need to sleep during the day, so that when the sun sets they will be ready for a new night of action.

And the only daylight customers you’ll see are the tourists, who never knew the other face of Macau, and the cleaners who ready the city for the next plane load of enthusiastic passengers and the next train full of excited amateurs, with pockets full of cash and dreams of a rich future ahead of them.