Editor’s Note: Marshall Schoenthal is a Washington, D.C.-based manager for a technology company, living in Bombay, India, for one year. The following travel log aims to illustrate not just elements of Indian culture, but also the thoughts and reactions of a twenty-something Westerner transplanted into a new and different world. We hope to offer regular updates from Marshall in the coming months.Saturday, April 26, 2003
Last weekend we decided to take a little break from reality and spend the day at the Taj Hotel swimming and relaxing. It was great to spend a day away from rickshaws, horns, and people. Although I am enjoying India the constant activity, sounds and smells will get to anyone not accustom to such activity after a couple of months. After laying next to the pool for a couple of hours, we topped it off with a massage. I continue to fail in my efforts to get away from the office for extended periods of time, so the rest of the weekend was spent going out in Bandara and working.

Occasionally I will sit back and just find it completely weird that I am living in India. This happened yesterday on my way to work. Mike and I left the apartment as usual, flagged a rickshaw and prepared for our daily drive. The only difference is that, until now, I had not ridden in a rick that smelled like sewage to the point that I was almost sick. The real low point was that the driver blared Celine Dion the whole way. No matter where you go in the world you can not escape that woman.

Monday, April 14, 2003
Prior to the internet, life living overseas would have been much more difficult. I woke up Sunday to a panic attack that I had not done my taxes. Five years ago this would have been a problem, but in a couple of hours my taxes were complete and submitted to the IRS.

On Saturday I spend the afternoon with a recruiting firm, who we are hoping can help us find some new senior people for our office here. I am continually amazed that tasks that can be rather simple at home are two or three times as hard here. You can’t just go to a job site and wait for the resumes to come in; plus, here, the resumes are full of fabrications.

The weather continues to be hot and the humidity is rising.

Wednesday, April 09, 2003
I found an article about the fashion show I went to earlier.

No matter where you live, not every day is interesting. The past couple of days, have included work, sleep, work, sleep…. Working for a global company and reporting to a boss five time zones behind you can make life very difficult. Just about the time that you are ready to leave for the day, everyone has at the head office has gotten around to reading the emails you sent earlier and is responding with additional work for you to complete. What makes life even more interesting, is the over-flowing email inbox when you get to work in the morning. Each morning is shot reading messages sent while you were getting your five hours of sleep.

While work has been the majority of my life the last several days, there have been a couple of notable exceptions:

1. Playstation 2
My roommate, Mike, who has been here about six weeks longer than me, decided that he had finally had enough of Indian TV, so it was time to get some alternative entertainment. Because of this I have spent the last three nights (which means from 10:30 P.M. to 12 A.M.) getting run off the road in “SpeedRacer 2,” body slammed in “WWF,” and body checked in hockey. Needless to say, my game skills have deteriorated, and the complexity of games has increased since I had my Atari in the early 80s

2. Running
To make another change to our lives Mike and I decided that we could not continue eating butter chicken with nan or take out pizza, and drinking two 40s of Kingfisher beer every night without countering the effect with a little exercise. So instead of changing our diet, we have started running every morning. Not far mind you.

To understand what it is like to run in Mumbai you should try the following. Collect the a week’s worth of garbage and about twenty large rocks and load it all in a hot steam room. Now take a hose, attach it to your car’s exhaust pipe, and run it into the steam room. Run around for 20 minutes inside said room and see how you feel at the end. I am not sure it is healthy at all.

3. Rolling Stones
When the Stones came to Washington, D.C., the price was between $200 and $400 dollars per ticket, so when the option of paying $20 to see them was presented I could not pass on it. The concert was great, they played every classic song you could ever want to hear, because they had never been to India. The only problem was it was about 90 degrees, so by the end of the concert it felt like someone had just dumped a bucket of water over my head.

Everyone in the audience was great except one group that decided I did not deserve the spot I had occupied for about an hour. When you are in a country where you do not speak the language and four guys decide to move you, unless you are bigger or dumber than me, you give in to them. For a brief minute I thought about standing up to them, but the thought of explaining to the police (who also do not speak English) that I was in the right, getting arrested and spending a night in the Mumbai city jail ran through my mind, and I decided I would be better off moving.

Even without this it was a fantastic concert and it will be a good story to say I saw the Stones in India one day.

Nothing major is planned this weekend, hopefully going sailing on Saturday again which should be even more fun with the 10 degree increase in temperature.

Tuesday, April 01, 2003
Saturday was spent shopping for an electronic gadget with the guys from the office. This was not like a trip to Circuit City–everything you can imagine is available, you just have to haggle for the price. There is an art to this that I have not yet mastered. You must start low, but as I learned, not too low or they just laugh you out of the store. The favorite tactic of the sales guy is to put the item in a bag and get it in your hand, so you’ll be that much closer to paying whatever he wants you to pay. My other favorite tactic was, if you say you need to go get money (because all transactions are cash only), the salesperson will walk with you to the ATM, so there’s no chance to get away. 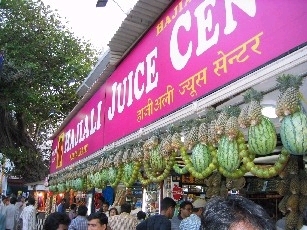 I did get the opportunity to try a new favorite stop called Hajiali Juice Centre. It is not quite juice, because it’s thicker than a “Frosty,” but the Mango juice was fantastic… I will return here.

Sunday King and I went to Chor Bazaar, it is said that you can get some real steals here but you must have a lot more patience than I have. In addition, the pointing and looks we got [for being foreigners] after two hours were more than I could handle. I had to return to my quite home in Bandra. 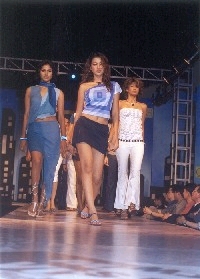 Sunday night I saw a different side of Bombay. Fraser took me to a fashion show. I will say this, it was quite an experience: the clothes (not sure who would wear them), the girls (very attractive), the crowd (you could tell there is a big gap between the haves and the have-nots in Bombay).

Monday I had a great evening with one of the best hosts in all of India. It was a great opportunity to meet people from outside the office and continue to expand my understanding of India. I am continually amazed by the hospitality of everyone I meet. In addition, it was one of the better meals I have had since I have been here.

Now back to work…

Saturday, March 29, 2003
No matter if I am in London, Tampa, or Bombay, I always seem to end up in the same seedy bar–usually of the clothing-optional variety. When my colleagues said they were taking me to a “dance bar” last night I figured it would be same as a strip club. I was almost right, men sat around, with rolls of cash, drinking, while women danced in front of them. There was even the token guy who actually believed the girls liked him for something other than the rupees he waved in front of her. The one difference was that the women here were fully clothed in traditional Indian dress. I could imagine in earlier times, lovely women dancing in front of the maharaja in a similar setting.