Sunlight finally filtered through the leaves, allowing my first glimpses of Lombok Island: lush tropical vegetation shaded the road and sparkling water flooded the rice fields. Our bemo–an Indonesian minibus–barreled down the mountainous road toward the port village Bangsal, from where my travel partner Toby and I would board the ferry to our ultimate destination: the Indonesian island of Gili Trawangan. We were now quickly approaching the ocean, the scent of the fresh salty air giving it away. Our paradise island, and the promise of a relaxing vacation, lay just around the bend.Off the Northwest coast of Lombok, Indonesia, reside three small islands: Gili Meno, Gili Air, and Gili Trawangan. Since the 1980s international tourism in Gili Trawangan has increasingly replaced agriculture and fishing as the dominant economic activity. Now a popular tourist destination, this island is known for its clear water, coral reefs, and abundant sea life, excellent for snorkeling and diving enthusiasts. Though only 2 km long, Gili Trawangan is the largest of the three tiny bodies of land. It provides the most tourist facilities and has the reputation of being the “party island” of the group. Budget travelers and tourists alike flock to the island to enjoy the affordable tropical paradise Indonesia is famous for.

Toby and I had barely even set foot on ground in Bangsal when an enthusiastic group of locals flocked to our bemo with offers of private charter boats to the islands. We declined, opting instead to wait for more travelers with whom we could share the costs of the voyage. Having given up on us as easy prey, the crowd reluctantly returned to lazing away under the morning sun.

By early afternoon, we had accrued an eclectic group of twelve adventurers from all corners of the globe, and together we set sail for Gili Trawangan. Forty-five minutes later our captain anchored the boat in the waist-deep waters near the beach, forcing us to wade into shore, backpacks balanced precariously over our heads. Apparently this was the usual method of disembarkation. On land, however, we received quite a reception, as what appeared to be half the island’s population greeted us with warm words and smiles. Moments later, without a word of encouragement on our part, a guide grabbed our baggage and whisked us away to find a losmen–a basic Indonesian accommodation.

Various lodging options exist on Gili Trawangan, ranging from rustic huts on the beach to fancy hotels. Toby and I toured the whole island in search of the perfect hideaway, and we finally settled on a charming bamboo bungalow. The chairs on the small verandah facing the ocean were ideal for observing the pink and orange colors painting the dusk sky. A large mosquito net hung over our clean double bed and the connecting concrete bathroom had a shower. Later we found out it only spouted out seawater, and the result was a week of itchy salt-coated skin. Our host repeatedly assured us no other cottage on the island, save the expensive resort down the street, had fresh-water showers, a “fact” we should have investigated, since some of our companions lodging elsewhere managed to continually look as fresh as the tropical flowers outside their bungalow.

But our losmen was secluded and we very much appreciated the serene atmosphere of the northern end of the island, in part due to our distance from the mosque. In a predominantly Muslim country, proximity to a wailing temple is always a consideration when scouting for quiet accommodation. While the morning calls to prayer are often haunting and beautiful, on this trip, I was eager to avoid bolting upright at dawn to these songs of the faithful.

Accepted as a state religion in Indonesia since the 15th and 16th centuries, Islam–the Arabic word for “submission”–is now the professed religion of 90% of the people who inhabit the archipelago. The religion was superimposed on Hinduism and indigenous beliefs, producing the unique hybrid that now predominates in Indonesia. Though a less orthodox form than that of many other Muslim countries, the same “Five Pillars of Islam” still exist: to submit themselves to Allah, to fast during the month of Ramadan, to give alms to the poor, to make the pilgrimage to Mecca at least once in a lifetime, and to pray five times a day. These calls to prayer influence everyday life and can be heard throughout the day (usually from a cassette recording) summoning faithful Muslims to submit to their one true God. The calls are loud and clear, permeating every nook and cranny of the little village on Gili Trawangan. 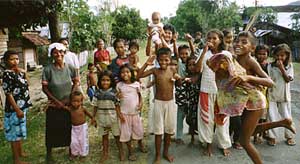 The Indonesians are a generally tolerant breed of Muslim, differing mainly from many other sects by how much freedom they allow their women: they are not segregated from the men nor are they forced to wear jilbab–the traditional Muslim head covering for women. However, tradition is still strong, and if a man and woman are spotted together after dark and are unmarried, they are immediately escorted by the village people to the temple and are forced to exchange wedding vows. The Muslim women’s lives consist of an endless stream of household duties and they are seldom seen outside their homes unless engaged in domestic chores.

I awoke early on our first morning and decided to explore the island before breakfast. I quickly noticed that Gili Trawangan consists of little more than the village and the main tourist strip along the beach. This main drag has all a traveler could want: Internet cafes, secondhand bookshops, candlelit restaurants, cozy bars overlooking the water, and movie lounges. Ironically, squeezed in between these modern facilities are traditional family-owned warungs–little food stands–and diners that serve local dishes such as nasi goreng and gado gado.

I finally strolled onto the main square of the island, expecting it to be deserted at six in the morning, but I was surprised to find it busy with the hustle and bustle of a morning market. Boats were docked nearby, having delivered fresh fruits, vegetables, eggs, and fish from the main island of Lombok. Traditionally clad Muslim women, draped in brightly colored sarongs, bartered with conviction. Once their sales were completed, they carried away their purchases by delicately balancing the baskets on their heads, graceful despite their heavy burden.

Some women loaded their products onto cidomos, horse-drawn vehicles adorned with ribbons and bells that swayed and jingled to the animal’s gait. The horse was linked to the cart by wooden poles fastened to a harness made of a used tire, and the eye blinders were fabricated from a recycled Sprite bottle. Impressed with their innovative spirit, I was even more enchanted with their general attitude toward life: they are a relaxed, tolerant people, and are warm and gracious hosts of their land. 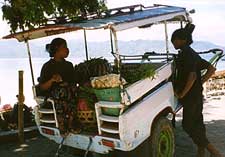 The days that followed passed blissfully as Toby and I settled on the beaches of Gili Trawangan. Ivory sand lined the coast, and palm trees swayed in the breeze, providing ample shade from the heat of the blazing tropical sun. Coral reef exploration took up whole afternoons as we followed multicolored fish on their search for food. We swam and played like dolphins, diving into schools of parrotfish to watch them scatter and regroup. Toby dove with a hawksbill turtle, and we both observed the wanderings of a large black eel.

We even snorkeled during a thunderstorm. While most visitors and locals dove for cover with the threat of approaching showers, Toby and I rushed to our bungalow to collect our gear. The warm rain poured over us as we explored the life below, calm and peaceful compared with the tempest above. We swam up to a boat anchored offshore and hung from the sides like monkeys, climbing on board and jumping off again. We reveled in the warmth of the sun and in the cleansing power of the Indonesian waters. We had adopted jam karat, a sort of “rubber time” illustrated in the relaxed Indonesian pace of life.

We rented our snorkeling equipment from the “Blue Marlin Dive Shop” in the center of the tourist strip. During the course of our stay on the island, the store proprietor often extended an invitation to their party on Friday night. Giving into their relentlessness, and to our curiosity, we finally accepted.

We arrived just after midnight and by then the party was in full swing, music heard blasting from afar. We walked through the doors and bumped into Sean, our perpetually intoxicated Irish friend who managed to articulate the following sentence: “It’s a sausage party in there. Enter at your own risk!” Having warned us, he staggered down the stairs, no doubt in search of fresh air.

Our curiosity piqued, Toby and I entered. With widening eyes we observed the scene before us: a sea of half clothed sweaty men on the dance floor, grinding to the beat of the techno music. It seemed to be the whole male population of the island, and the men easily outnumbered the women 20 to 1. The only ladies in the room were tourists, each surrounded by a group of admiring Indonesian men. Their women, bound by faith and domestic duty, stayed home. Within twenty minutes I’d seen enough and left Toby to fend for himself. The lack of tourism in Asia in recent years was apparent. What had no doubt been a vibrant party scene in the past was now reduced to a mere remnant of it.

I bought a flask of rum from the warung across the street and joined a lively group of people chatting under a bungalow. Some of them were fresh off the shuttle boat, while the island had claimed others for weeks, even months. I played bartender that night, fixing rum and cokes until the early morning hours. Some of the best conversations of my trip emerged from that night, as travelers from around the world shared their adventures and dreams.

The day came when Toby and I finally broke free of the island’s grasp. It had held us captive for far longer than anticipated, but we were happy to oblige. Prized as an unspoiled paradise island, Gili Trawangan delivered what it promised: striking white beaches, brilliant blue waters and coral reefs, friendly people still very much in tune with their beliefs and environment, and a wide range of accommodations and restaurants.

A perfect alternative to the expensive beach resorts many tourists opt for, this island offered affordable luxury, peace, and serenity, without sacrificing the Indonesian culture and spirit.