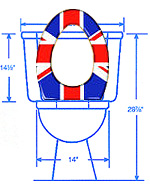 During my four weeks in the United Kingdom last summer, I crisscrossed the country and reveled in its history, beauty, and variety. As the landscape changed, so did the dialects, architecture, culture, and food, but I did find one constant. I was constantly plagued by inadequate plumbing. I have friends and relatives who have been to the U.K. I have friends who are British. Why didn’t anyone warn me? Okay, the topic isn’t one likely to come up in polite conversation, but when my family asked me about my trip, I couldn’t help but express my frustration with the plumbing issues I faced daily. The Brits may take pride in their long history, progressive metropolises, and quaint country towns, but there is something to be said for modern convenience where you need it most: in the bathroom. Since my return, when I have had occasion to bring the subject up, I’ve gotten reactions ranging from surprise to a casual shrug as if it was something that everyone knew. For those of you who do not know, please read on…

Toilets
Considering the inventor of the flushable toilet, Albert Giblin (credit is often, wrongfully, bestowed upon Sir Thomas Crapper), was himself a Brit, there is little excuse for primitive nature of British loos. At first, I thought I was just having bad luck, but after comparing notes with a fellow traveler, and discovering that she had encountered the same problems, we had a lengthy discussion about our experiences and came to the following conclusion: it takes at least three flushes to do the job. Holding the handle down longer doesn’t help and, in fact, can exacerbate the problem. I spent 20 minutes some days just trying to make sure that the loo was fully flushed for the next person.

Apparently, poorly functioning toilets are so widespread throughout the country that everyone just incorporates it into their day, like breathing. Near the end of my trip, I asked a friend who is a native Brit if he’d ever noticed problems flushing the toilets. He just shrugged. He didn’t seem to care. I wondered if his casual attitude was because he’d never experienced a properly functioning toilet? My advice: let the toilet water run full cycle before trying again, and if you are in a big hurry, try to sneak out of the bathroom before anyone figures out which stall you used.

The one bright spot I found during my toilet toiling was that Brits do have a sense of humor, however subtle and twisted. They annually acknowledge the “Loo of the Year” (see http://freespace.virgin.net/martin.higham/).

I expect there is a long checklist of qualifications used to determine which public facility deserves such an honor, however, flushability is the obvious exemption. I know this because I used the bathroom at Castle Howard (outside of York, in North England) recipient of “2001 Loo of the Year” award. While the bathroom was attractive, with wood paneled stalls and Corian-style wash basins, I ranked it in my top three most troublesome flushing experiences (and make no mistake, that was not due to my contributions).

I did have a favorite public bathroom. It was in a little café in Guildford, about an hour south of London. The washroom was very small–actually closet-like–and had just one toilet and a very small sink. Despite the lack of elbow room (don’t try to bring your backpack in there), it had two very key benefits, a unique toilet seat and a one-flush-and-you’re-all-set feature. The toilet seat was outstanding. It was made of clear plastic, and suspended inside the mold were pieces of candy: lifesavers, gummy bears, gumdrops, peppermint swirls, and lollipops. My only regret from my entire trip was that I did not have my camera in there with me to take a picture of this seat. The fact that the toilet flushed on the first try was an added bonus, and the combination alone should qualify it hands down as the “Premier Loo of the U.K.” (For more on British toilets, see http://www.britloos.co.uk/.)

While the toilets were troublesome, they were at times amusing. What I found distinctly less amusing was what the people of Britain accept as a sorry excuse for a shower.

Showers
I never did get confirmation on this, but I decided that British people must take a lot of baths because, aside from in the newer buildings (and even sometimes in those), every place I stayed had a bathtub with a makeshift shower. By makeshift I mean, instead of a sturdy chrome shower head poking through a wall of tile, as you might expect in many other first-world countries, a bather is instead faced with a hose-like contraption bracketed up the wall above the tub faucet and topped with a small plastic showerhead, all resembling a slightly larger version of one of those flexi-hose nozzles used to help rinse dishes in the kitchen sink. It was as if someone had traveled to America, been impressed by our quick and convenient method of bathing, and rushed home to the mother land to jerry rig a similar contraption from a piece of garden hose and a small sprinkler head. And after it was done once, the idea took off like wildfire across the country, with every copy cat using the same cheap parts.

Another interesting feature is that no shower in the U.K. operates by simply turning on the water–that would be too easy. Every single shower I used had a trick to it. You have to find the pull-cord or the red switch or knob, or all three, before you could get the eventual trickle of water to leak out. I strongly advise travelers to ask your host how the shower works before you are left alone in the bathroom to fend for yourself.

Also, since water pressure seems to be potluck, I often had trouble rinsing the shampoo from my hair, and usually ended up with rather dull, flat locks. My solution: don’t wash your hair more than once a week (it looks the same clean or dirty under these conditions anyway). Another option is to finish showering, then rinse your hair under the tub faucet. This works better, but it was difficult to get into an effective position, and I felt a little silly trying, so I only did it once, when I was staying in York, home of the worst plumbing in the country. (I do advise that if you are really struggling with these toilet and shower issues, avoid York altogether.)

Water pressure problems are the main source of the flushing and showering struggles. Most British homes have only a 1/2-inch supply line to the water main (compared to the much larger standard American pipes), which will not provide enough water for simultaneous use of sinks, showers, and/or toilets. To get around this problem, many homes have installed a cistern in the attic that depends on gravity to distribute water through the rest of the house. This sometimes forces a homeowner to install a pump or heater/pump in places like the shower (hence the switches, knobs, and pull-cords mentioned above) just to have somewhat adequate water pressure. As it is, the materials used in shower construction are designed for low-pressure flow.

My personal theory (and this has not been confirmed) is that the plumbing in much of Britain was installed in the wake of the devastation caused by World War II, and has yet to undergo any major renovation since then. And because the Brits seem perfectly content to live with their showers and loos as is, we tourists who are used to a little something more must simply get used to it too. But if you’re like me and love to travel, but always end up writing “Things I Miss from Home” lists, you can be sure that your bathroom, will be at the tops of that list, and it will forever after hold a special place in your heart.