Perhaps it was the wild boar on the menu that gave it away. Or the way the chef emerged excitedly from the kitchen, white uniform tight and stained, to chat with us after he heard foreigners in the house. The restaurant, and in fact the whole town of Tende, was devoid of pretension and decidedly un-French. Somehow, the unrefined game animal, which may have been tromping through the forest that cloaked the valley below just the day before, found its way onto the menu next to the fromage and paté.

We were two travelers passing through, just looking around for somewhere interesting during the late autumn lull so common to mountain towns before the snow falls. Seated in what may be France’s only existing non-smoking area, we were studying the menu when the chef brought a wood plaque with an old 1992 Boston Globe article mounted on it. It was a review of his restaurant, and quite clearly the showpiece of the place. He clasped his hands together underneath his protruding belly and beamed as we read.

Such a welcome from the French was unusual. We had just driven up along the French-Italian border from Nice and the Riviera, where waiters corrected our grammar and shopkeepers could not be bothered to utter a merci. Conversely, Tende seemed eerily pleased with our presence. For a moment we thought we had unknowingly exited France, and slipped over the border into the care of French-speaking Italians. Somehow this anomaly town called Tende, like the wild boar, had wound up on our plate.

Nestled between the high Alps and the balmy Mediterranean shores, Tende sits like a fickle queen at the head of the Roya Valley, not committing to either climate or culture. The icy Tende river swirls through the town and meets the warm Mediterranean Sea only 40 kilometers away. In autumn, the town is ringed by 2000-meter peaks dusted with snow while stands of larch trees and pine decorate its flanks. The smell of toasty household fires belies the sight of perky reds and purples in flower boxes outside.

Tende’s cultural duality unfurled as we strolled through town. The cemetery´s headstones read both Bertrand and Cacciardo. The living still greet one another with ciaos and bonjours. The postman delivers all of the 2,000 residents’ mail on foot, and squeezes copies of Le Figaro magazine in tiny mail slots of homes hundreds of years old. These dwellings, many of which are approached only by meter-wide passageways, encircle the pink Gothic church of Tende. Inside the church, signs in French and Italian ask you to be quiet. Not that there would be much yukking it up at this time of the year—the autumn silence of Tende is broken only by the hourly bong of the clock tower.

Sundials on the sides of buildings were quieter reminders of time, but of time that passed slowly and deliciously. I imagined one hundred years from now you could still peer in dusty windows of medieval edifices and dip your bucket in the community water fountain. You could get lost in the labyrinth of cobblestone backstreet’s, but then get pointed gently in the right direction. I sensed the old women would forever shuffle along unhurriedly, waving at virtually every car that drove past, and stopping occasionally to chat with its occupants and double kiss their cheeks. Shopping in Tende continued in the traditional fashion; it meant separate visits to the boulangerie, charcuterie, and patisserie, for bread, meat and pastries. The store hours ensured a lengthy lunch and a healthy afternoon nap. 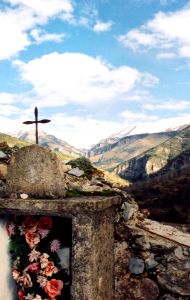 Not surprisingly, this little French town does indeed have its roots in Italy. When the House of Savoie absorbed Tende in 1581, the town became a crucial stop on the Salt Route between Nice and Turin. When the communes of Savoie were rejoined to France in 1860, the residents of Tende were still French speaking and wanted to be included in the reunion. Deaf to their pleas, Napoleon III snubbed the town and left it to Italy. Tende, along with the Roya Valley, was the preferred hunting ground of Italian royalty and presumably their source for tasty wild boar. It wasn’t until 1947 that the peace treaty between the two countries allowed Tende back into France.

Perhaps after Napolean’s rejection, Tende vowed never to become wholly French. Not once were we expected to wear flashy clothes, given wrong directions, or seated next to a middle-aged woman cooing to her dog at the dinner table. No one ridiculed our butchered French. Instead, our hotel owner was concerned if we were comfy, store clerks asked if they could help, and restaurant staff treated us like prized patrons with discriminating tastes. Tende was France as we wanted it to be.

That’s not to say it is undiscovered. In the summer, tourists flock to Tende to access the adjacent Mercantour National Park to picnic, hike and gawk at over 36,000 petroglyph’s from the Bronze Age. Tucked away in the park’s Vallee des Merveilles, or Valley of Marvels, the petroglyph’s attest to the movement of people through the area thousands of years ago as well. Although most of the stone etchings are the garden-variety spirals and cows, one petroglyph in particular commands attention and still lingers in mystery. Dubbed The Sorcerer, it was found on a rock slab at the base of Mt. Bego, and it depicts a human figure whose arms appear to be lightning bolts.

Archaeologists are baffled by the meaning of this mysterious figure that in no way relates to the others. Is it a shaman, a god, a sign of the supernatural? Our hotel owner, Francoise, had a giant print of The Sorcerer hanging in her dining room. She had her own interpretation of its meaning. For centuries, Mt. Bego has attracted violent storms, she said. Ancient people saw this and they were afraid of the mountain’s powers and declared the mountain a sacred site. Then they carved a warning in stone. Now preserved in Tende’s surprisingly sophisticated Merveilles museum, visitors are left to wonder what story The Sorcerer is telling in stone.

These days locals tell their stories at the bar. We stepped into one which also fronted as a café. Old men were clustered around a counter, slurping strong coffee and smoking, slapping one another on the back, and waving their arms in feigned arguments. Their tanned gnarled hands spoke of Mediterranean sunshine and hard mountain work. 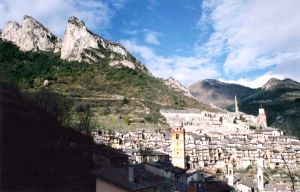 Outside, a single crumbling spire that looms over the town tells the best story of Tende’s political tug of war. It is all that remains of a grand 14th-century French château which was ordered by the Italian king to be destroyed in 1692. Tende’s residents, then under the rule of Italy but still allegiant to France, refused to demolish it. Consequently, the town’s neighbors took it upon themselves to bring the château to the ground.

As we finished our wild boar, the pleasant wife of our chef wiped the counter slowly and chatted with us, lamenting that Tende is still being pushed around. The town is still relatively ignored, she said, and lives in the shadows of its resort-town sisters like Nice and Chamonix. She sighed and rested her chin in her hand, saying it is the lack of employment in Tende and attraction of the urban areas that draws the young people away.

We had to agree. Tende could be a youth’s nightmare: a home town locked in time, devoid of the dynamism so prevalent in neighboring cities. Yet for us, it was a lucky find. This town took us in like it was welcoming its children back home.